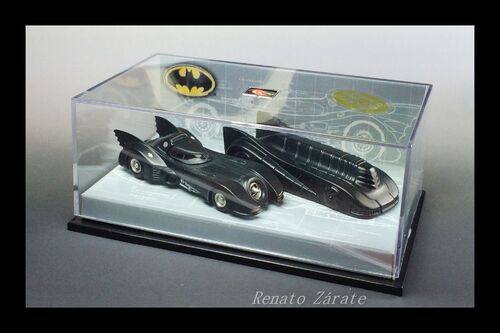 As a sleek roadster, the Batmobile is unstoppable on the tough terrain of Gotham City. Designed to handle razor-sharp turns at blinding speeds, the vehicle can accelerate from 0 to 90 mph in mere seconds, catching any adversary foolish enough to escape.

But in the heat of battle, the Batmobile is ready to rumble as a full-force armored vehicle. Batman's voice-activated controls transform his racing machine into central command, providing him all the protection needed to complete his mission. Armed with everything from axle grenades to bullet-proof plating, there is no doubt Batman drives the hottest wheels in town!

We are proud to present the 1:64 scale Batmobile and the vehicle in its transformed state in this collectible 2-car set.

The following vehicles were included in the Batman Shields Up 2-Car Set:

Retrieved from "https://hotwheels.fandom.com/wiki/Batman_Shields_Up_2-Car_Set?oldid=350127"
Community content is available under CC-BY-SA unless otherwise noted.