In line with the 2016-movie Batman v Superman: Dawn of Justice (released March 2016), Hot Wheels releases a special 8-car series. The cards have graphics that feature the protagonists of the movie (Batman and Superman) and the deuteragonist of the movie (Wonder Woman). One of the cars is a 'special' Twin Mill, that model depicts both Batman and Superman (and Hot Wheels even made a real life version of this car, see Gallery). Besides the 8 models there's also a 2-Pack released which includes Character Cars of Armored Batman and the Man of Steel and The 5-pack released which include the Batmobile from the Movie.

The Batman v Superman Series features 8 different models that were launched in Nov 2015. 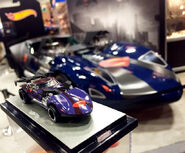