AcceleRacers' Battle Spec has a carbon fiber monocoque. The car is powered by a 420HP of torque aluminum 2.2L four-cylinder with a DOHC performance camshafted turbocharged engine with 440ft/lb of torque in the center front of the car, hooked up to a 7 speed transmission. The right side of the car are intakes for the four-cylinder motor, the JT-10 turbo on the exhaust, and intercooler pipes. The intercooler is mounted on the bottom of the chassis, taking air from the front intake to the hood outlet which creates a vacuum that forces air faster through it and is forced even faster by the top intake. In the movie AcceleRacers, Kurt Wylde built this car after his Slingshot was destroyed. It was built on the Power Rage's chassis. The monocoque is a sleek shape and streamlined. There is a front brake outlet for the 8 piston carbon-ceramic brakes, and it also has a rear angled spoiler. Like all Teku cars, the Battle Spec has HID (high-intensity discharge) headlamps.

In 2015, the tooling for the Battle Spec was updated; the spoiler has been raised higher and is now part of the interior piece.

The Battle Spec has been released in the following 1/64 scale versions: 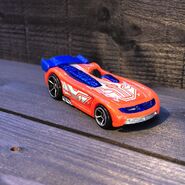 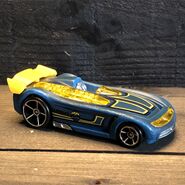