The Beatnik Bandit is a Hot Wheels casting which debuted in 1968 as part of the first sixteen Hot Wheels ever, sometimes known as the 'Sweet Sixteen'. It is based on the custom car built by Ed Roth in 1960.

The real-life Beatnik Bandit was built on a shortened 1950 Oldsmobile chassis and featured a fiberglass custom body, complete with a bubble-top which doubled as both the roof and door. It also featured a unique 'control stick' which operated the acceleration, brakes, steering and gear changes. The car still exists today and is on permanent display at the National Automobile Museum in Reno, Nevada.

The original 'Redline Era' version of the Beatnik Bandit was manufactured from 1968 to 1971 in both the USA and Hong Kong factories. There are several differences between USA and 'HK' manufactured cars. USA cars have a clear glass dome and the 'control stick' interior while HK produced vehicles have blue tinted glass and a black steering wheel. USA cars have engines with dual injectors while HK engines have a blower on top. Hong Kong cars have four square openings in the base which show the Bent Axle Suspension, these holes are absent from USA vehicles. Also Hong Kong cars have a slightly larger grille and headlights.

They were painted in various 'Spectraflame' colors, some of which are very hard to find. They could also be found with either a White, Gray or Dark Brown interior. They were packaged with a metal 'Collector's Button'.

In 1993, the Beatnik Bandit was revived for the 25th Anniversary Series, which replicated original 'Redline Era' vehicles, including several colors of each car replicating the original Spectraflame colors. The following year, it was released in the Vintage Series, again in several colors. Both the 25th Anniversary and Vintage releases were packaged with a replica plastic 'Collector's Button'. This casting was used a few times before being retired and again re-tooled for HotWheelsCollectors.com.

In 2002, a more detailed version of the Beatnik Bandit was created, this time including an opening 'bubble-top'. This version was only used once.

The Beatnik Bandit has come out in the following 1/64 scale versions:

The Beatnik Bandit has come out in the following 1/64 scale versions: 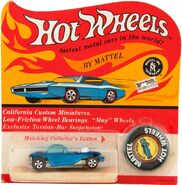 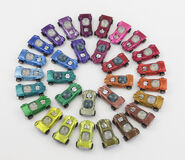 US castings on the outside ring and HK on the inside. All colors (plus a few)

US purples with different interior colors

US casting in light blue with different interiors

USA, either Magenta, Rose or Creamy 'Lavender' Pink. A vehicle which illustrates how inconsistencies in the Spectraflame painting process can cause confusion. 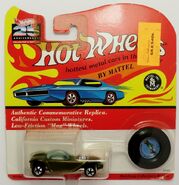 Hall of Fame Edition in package

Hot Wheels® proudly presents your 2013 Rewards car. Thank you for being a loyal subscriber during this past year. Produced in limited quantities, you are now the proud owner of this Beatnik Bandit. 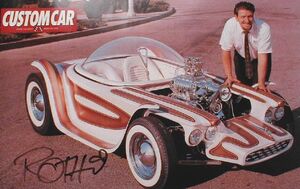 The Beatnik Bandit was designed and built by Ed "Big Daddy" Roth and was the second of his creations to tour with the International Championship Auto Shows (ICAS), in the 1960-61 season. The Outlaw was Roth's first ICAS custom, but the Bandit was the first Roth car created by their Show Car Division specifically for the show circuit. The Beatnik Bandit started out as a project car for Rod & Custom magazine. It was built using a 1955 Oldsmobile frame which was shortened, then covered in plaster to create a mold for the all-fiberglass body. The duel-carb blown Oldsmobile engine sits forward of a hand-made custom bubble top created by carefully softening a sheet of plexiglas in a large pizza oven to the point just before it becomes molten.