The Blazer 4×4 was designed by Larry Wood and first introduced in 1984 and ran until 1996. In 2004 the Blazer 4×4 came back for that year only in a small run using the original tool and die in a series called "The Lost Cars of China". It has since been retooled as of 2016 and is back into production again, and is renamed as Chevy Blazer 4×4.

The Chevy Blazer 4x4 was redesigned and replaced the first Blazer 4x4' that ran from 1984 until 2004. Some of the obvious differences between the two castings are the doors. The early version has opening doors where-as the new version doors are cast shut. The roof is now a portion of the "glass". The early version is cast solid. The grill seems to be similar, but is slightly different. 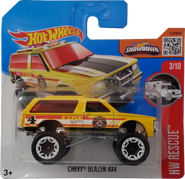 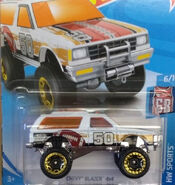