The tail fins on the blimp can be rotated to reveal two different messages printed on the left side of the blimp.

The Blimp has come out in the following 1/64 scale versions: 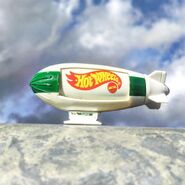