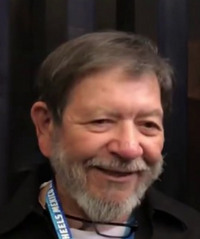 Robert Rosas is a former Hot Wheels designer and engineer who worked for Mattel from 1969 to 1989. He is known to have worked alongside Larry Wood in the design department, designing and innovating for various Hot Wheels series. He worked his way up to become the director of the Hot Wheels engineering group before leaving Mattel entirely in 1989. Many of the innovative series such as X-V Racers, Steering Rigs, Crack-Ups, Flip Outs and the like can all be attributed to Rosas's work. He is currently retired, although his relationship with Hot Wheels's Design Team remains healthy, frequently attending conventions.

In Bobs own words

It was 1968 and Hot Wheels were the hottest new toys for boys. Mattel used all its resources for design, engineering, and tooling and was looking every where especially in the southern California area for vendors and contract people to help them. Why vendors and contract engineers, designer’s etc? Because they just did not have the facility for all the help they needed.

At the time Bob was doing contract engineering on tooling. The company he was working for was one of several that got contracts from Mattel to design the molds for toys and especially Hot Wheels. He didn’t think much of it at the time but there he was designing a multi-cavity tool for Classic 32 Ford Vicky toy number 6250. This was the first of about 24 different ones that he worked on. He was working in Fullerton Ca and would go into Mattel in Hawthorne Ca once a week to get approval on the drawings or changes that needed to be made. He would work with the engineers and designers that worked Hot Wheels at the time and met some great people there.

It was not too long after that he was hired to work at Mattel in Hawthorne. He started out working on Barbie accessories, preschool toys and Big Jim before he was assigned to the Hot Wheels group. Bob’s first car he worked on was the Baja Bruiser whose concept was by Larry Wood. He continued working on the designs for hundreds of cars over the years. Eventually he Managed the engineering group for Hot Wheels and directed many people on cars and sets until he left Mattel in 1988.

During those years some his biggest endeavors was his involvement in the beginnings of the tampo printing process. Some of the other projects were Thundershift 500, Machine Paks, Thrill Drivers Corkscrew, Mean Machines (motorcycles), The collectors patch series, The Heroes, Scene Machines, Spiderman’s “Web of Terror”, Scorchers, The collector books from 1981 and 1982, Steering rigs, Steering rig cabs, Sto and Go’s, Mega Force, Truck Company, Shift Kickers, Power Devils, 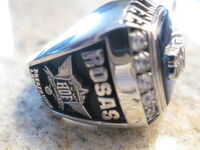 Larry Wood and Bob Rosas worked together for many years and one of their personal projects was to promote the idea that we should make cars that appealed to an ever-growing collector market. We became aware of the interest in collecting Hot Wheels by grown men and women probably as far back as the late 70’s. As a result of this he encouraged Mattel make more classic cars and the cars with the “real rider” tires. 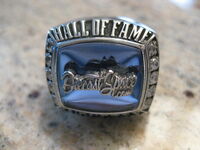 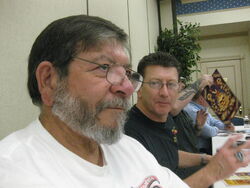 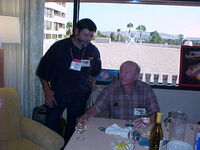 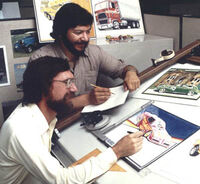 This was at Mattel Bob with Larry Wood working of Hot Wheels Designs in 1981.