The Boom Car is a Hot Wheels original model designed by designer Tyler Charest. Tyler explains in the All Access blog on the Hot Wheels YouTube Channel that he wanted to make a downhill race car that put the "fun in function". This resulted in the Boom Car. According to Tyler it's unlike a "traditional Hot Wheels car", which is aggressive, a speed machine, sleek, low and fast-proportioned. It is the exact opposite of that idea: a motorless model, a real down hill racer. Minifigures can be inserted into the open cannon and flicked out by your fingers.

The Boom Car has come out in the following 1/64 scale versions:

Born: 2017
Birthplace: El Segundo
Designer: Hot Wheels®
Specialty: Whether you're riding the rolling cannon or getting ready to blast off, the Boom Car™ is ready to launch you outta this world! With several places to attach your figures, this dynamite ride is ready to shatter some records! 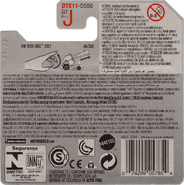 The back of the card, encouraging you to 'shoot' your minifigures.

Retrieved from "https://hotwheels.fandom.com/wiki/Boom_Car?oldid=329959"
Community content is available under CC-BY-SA unless otherwise noted.