Brabham Repco F1 was Introduced in  1969 Hot Wheels lineup, based off the Brabham race car. Driven by  a Repco motor.This was part of the first ever series Grand Prix. The Cars were packaged with a metal 'Collector's Button'.

Most have Black interior, but white interiors can be found

Prototypes will have clear glass

Only issued out of Hong Kong. Like the other Indy cars.

The Brabham Repco F1 has come out in the following 1/64 scale versions: 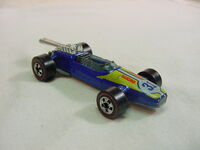