Balthazar Bratt is the main antagonist of Despicable Me 3. He was a former child star in the 80's who, succeeding his show's cancellation after hitting puberty, plans on world domination. He dresses in a purple jumpsuit, with shoulder pads and parachute pants. He wears fingerless gloves and white shoes. In addition, some of his hair behind is cut while the rest of other hair is long and black (including a small bald spot from aging); he also has a medium-long handlebar mustache. Balthazar Bratt was nothing more or less than a pure megalomaniac and psychopath with 100% egotism. He is a pure egotist as he thinks almost only on himself and only on his actions. In addition to him being a megalomaniac and egotist, Bratt is an extremely ruthless and destructive individual, showing no mercy towards his enemies especially when he attempted to destroy Hollywood and mostly, he enjoys wreaking havoc and destruction.

The Hot Wheels version is based on a super-fast, over-the-top sleek and smooth sports car. Bratt's shoulder pads are represented by the massive wing. His vertical cylinder of hair is converted into eight exhausts. His bald spot is shown underneath the large wing.

The Bratt has come out in the following 1/64 scale versions: 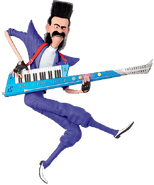 Bratt as he appears in the Despicable Me 3 movie. 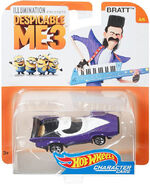 Bratt rear view.
Add a photo to this gallery
Retrieved from "https://hotwheels.fandom.com/wiki/Bratt?oldid=342290"
Community content is available under CC-BY-SA unless otherwise noted.