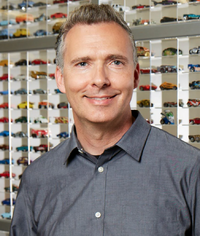 Bryan Ray Benedict is a designer who has been working at Hot Wheels since 2004; he currently holds the position of Senior Design Manager. Prior to working at Hot Wheels, he worked as a designer for Honda's R&D department and did projects for Mercedes-Benz and Mitsubishi. Benedict's first Hot Wheels design, the Ford GTX-1, was released in 2007; his current scope of design mainly involves with the Character Cars (which he oversees the development of) and some Monster Trucks (which he formerly oversaw), having worked on both the Monster Jam and Hot Wheels Monster Trucks product line.