The Bugatti Veyron is a French high-performance sports car manufactured by Bugatti Automobiles S.A.S. from 2005 through 2014. Named for French motor racing driver Pierre Veyron, the Veyron is powered by a 8.0L quad-turbo W16 producing 1001 BHP, although subsequent versions tune the engine to more extreme levels. Production ended in 2014 with 450 produced. On introduction, the Veyron was one of the most expensive cars on sale at €1.7 million and also the fastest; a version of the Veyron has been verified by the Guinness Book of World Records as the world's fastest car, clocking a speed of 267.856 mph (431.072 km/h).

The casting introduced in 2002 was intended to resemble the concept version of the Bugatti Veyron as shown off in 2000 at the Detroit Motor Show, although the car features what appears to be the W18 engine from the previous iteration of the concept, the 18/4; certain versions of the Veyron casting are noted for their high resale values. The casting was given a retool in 2021, where the entire tooling of the casting was updated in an attempt to reflect the production version as opposed to the Veyron Concept the original tooling resembled.

The Bugatti Veyron has come out in the following versions: 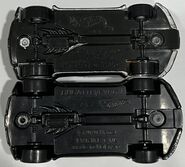 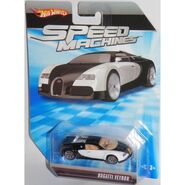 2010 Hot Auction Blue Veyron with base code B45 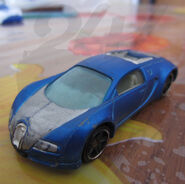