The Bugeye is a Hot Wheels casting designed by Larry Wood which debuted in the 1971 Hot Wheels range of vehicles. It is a wedge shaped car with a divided seating section which inspires its name. It features an opening engine compartment in the rear which can be found with or without power bugle scoops

For its initial release, it was manufactured in both the USA and Hong Kong in various Spectraflame colours from 1971 to 1972. USA releases of the Bugeye all have clear glass and white interiors, and could be found with either the scooped or smooth engine cover. Hong Kong releases all have blue tinted glass and dark interiors and can only found with the scooped engine cover.

The Bugeye was also released in 1973 as a Shell Promo, a giveaway promotional car handed out to customers at Shell service stations. As with other 1973 cars, it lost its Spectraflame paint which was replaced with enamel paint. These releases were manufactured in Hong Kong and as such, had blue tinted windows and dark interiors just like their 1971 counterparts. As with many 1973 vehicles, the Bugeye was found with the new-style 'Hole-Through' Redline wheels on the front and the older 'Capped' style Redline wheels on the rear.

The Bugeye was also manufactured by CIPSA in Mexico, these versions are very hard to find and are usually in poor condition. (More information below).

The Bugeye has not been seen since 1973.

In the early 1970's, the Bugeye was manufactured by CIPSA in Mexico for the Mexican market using the scooped engine cover casting. These versions differ from the regular versions in a couple of small ways. The interior is a stark white compared to the creamier white of the 1971 USA versions, and the glass is clear but appears to have a very pale blue tint. Despite being manufactured in Mexico, they are still marked with 'Hong Kong' on the base. 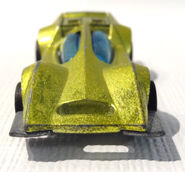 Add a photo to this gallery
Retrieved from "https://hotwheels.fandom.com/wiki/Bugeye?oldid=331641"
Community content is available under CC-BY-SA unless otherwise noted.