The Bye-Focal is a Hot Wheels casting designed by Larry Wood which debuted in the 1971 Hot Wheels range of vehicles. It is based on a '70 Dodge Challenger with some serious vision. Featuring two Injected V-8's under glass on an elongated front clip, and a stubby shortened rear end. The Bye Focal is a fairly hard to find and desirable casting overall.

All Bye-Focals were manufactured in Hong Kong and featured blue-tint glass and 'Capped' Redline wheels. Mostly produced with a clear blue hood, some can be found with a clear hood. Some can be found with a hard to find variation where the injectors on the engine are missing. Decals featuring a pair of glasses with "Bye-Focal" written on it are factory-applied on the driver's side, with an extra optional sticker to be applied by the user, also included in the package was a plastic 'collectors button'.

It was painted in various Spectraflame colors, of which Purple is the hardest to find and is regarded as one of the rarest of all Redline Hot Wheels from the Spectraflame Era (1968-1972). Due to shade differences in the Spectraflame painting process, the existence of a Spectraflame Olive version receives skepticism by collectors and is generally believed to be merely a regular Spectraflame Yellow which has 'Toned' (dulling of the metal) rather than a completely separate color.

The Bye-Focal is known to have issues with a metal fatigue called 'Crumbling' where the body or chassis develops cracks and literally crumbles into pieces.

In 1973, the Bye Focal was released without the clear hood and renamed the Show-Off.

In 2003, the Bye-Focal was re-tooled for the HotWheelsCollectors.com Series 2 Super Chromes.

The Bye-Focal has come out in the following 1/64 scale versions, :

The Bye-Focal has come out in the following 1/64 scale versions, : 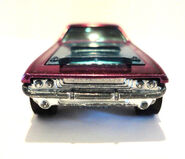 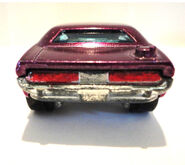