This 'Tooned model of the Chevrolet C6 Corvette was released as part of the Hot 100 in 2004. It is a good example of 'Tooned styling with the proportions being cartoonish and the details matching the full size model.

Three versions of the new for 2004 Corvette were released in 2004 including Realistic, Fatbax, and 'Tooned. From the 2017 version onwards, the C6 Corvette uses same sized wheels in proportion for the front and rear.

The base of the casting reads 2005 Corvette.

The 'Tooned C6 Corvette has come out in the following 1/64 scale versions: 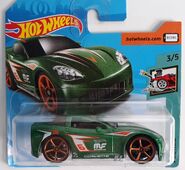