This vehicle is based on CAT Bulldozer, as the name says.

This casting, along with many others, were used in the late 1990s Matchbox Dirt Machines line. Matchbox referred to this tooling as Bulldozer.

The CAT Bulldozer has come out in the following 1/64 scale versions:

The CAT Bulldozer was retooled to remove the moving rubber treads and moving blade. The treads are now plastic and are static, the blade is part of the base and there are small plastic wheels in the base. The 'CAT' has also been dropped from the name, despite the only release being CAT's iconic yellow color. 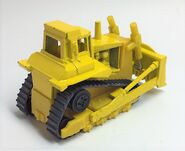