The Cadillac Elmiraj is a concept car created by Cadillac and unveiled at the 2013 Pebble Beach Concours d'Elegance on August 15, 2013. It continues the development begun by the Cadillac Ciel concept car. It was named for the El Mirage dry lake bed that was used for high speed runs. The car is a 2-door, 4-seat full-size luxury coupe. 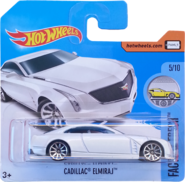 2020 HW Exotics 5-pack
Add a photo to this gallery
Retrieved from "https://hotwheels.fandom.com/wiki/Cadillac_Elmiraj?oldid=353193"
Community content is available under CC-BY-SA unless otherwise noted.