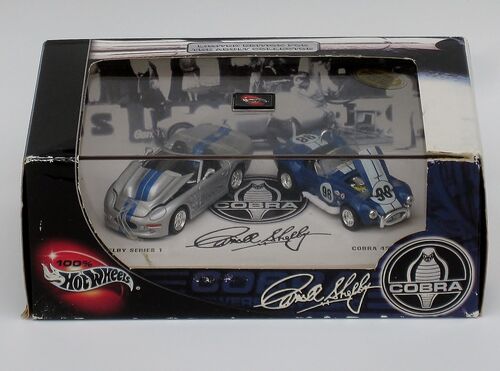 No other racecar driver, designer and builder has had such a powerful influence on the history of the sports car than Carroll Shelby. Nurturing the idea of developing an inexpensive American sports car, Shelby designed a vehicle with a light sports car chassis, powered by an American V8 engine. Known as the Cobra, his car set the tone for the '60's Muscle Car era and became an instant legend.

With the introduction of his new Series 1 sports car, Carroll Shelby continued his tradition of creating vehicles possessing undeniable charisma and all-but-unbeatable performance. We are proud to honor Carroll Shelby and salute his immeasurable impact on the automotive industry through the design, engineering and building of legendary Shelby sports cars.

The following vehicles were included in the Carroll Shelby Cobra 2-Car Set:

Rear of box
Add a photo to this gallery
Retrieved from "https://hotwheels.fandom.com/wiki/Carroll_Shelby_Cobra_2-Car_Set?oldid=210884"
Community content is available under CC-BY-SA unless otherwise noted.