The Chevy Camaro Concept is a Hot Wheels casting based on the concept car of the same name, debuting in the 2007 New Models.

The Chevy Camaro Concept has come out in the following versions:

Specialty: This concept car was made to take a ride down muscle-memory lane with classic Camaro® styling and a V8 engine.

Comparing the Camaro Convertible Concept with the Chevy Camaro Concept. 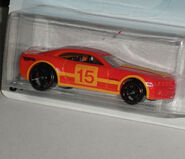 a red version with the 5SP wheels

Retrieved from "https://hotwheels.fandom.com/wiki/Chevy_Camaro_Concept?oldid=375776"
Community content is available under CC-BY-SA unless otherwise noted.