The Chevrolet "Chevy" Silverado, and its mechanically identical cousin, the GMC Sierra, are a series of full-size and heavy-duty pickup trucks manufactured by General Motors and introduced in 1999. General Motors manufactured 5,990 units with manual transmissions (335 extended cab) (5,635 standard cab) and 5 million units with automatic transmissions.

The all-new GMT900 generation of the Silverado arrived in the last quarter of 2006 as a 2007 model. It features a redesigned exterior, interior, frame, and suspension as well as a power increases on certain engines. These pickups also have greatly improved aerodynamics over their predecessors like steeply raked windshields and tighter panel gaps which improve fuel economy. The Generation III small block V8 engines offered in the GMT 800 trucks were replaced in the GMT 900 series by the Generation IV small block V8 engine family, featuring upgrades such as increased power and Active Fuel Management on the 5.3 L and 6.0 L V8s. A new high performance 6.2 liter V8 (with 403 hp (301 kW) and 417 lb·ft (565 N·m) of torque) was introduced.

This model included a removable plastic sport bike in the truck bed. Due to cost-cutting measures, this casting lost the motorcycle in 2012. In 2016, as part of the premium Hot Wheels Car Culture - Trucks, the motorcycle returned as part of the casting. This lowered Chevy Silverado also has an off-road 4x4 counterpart. In 2015, as part of the Hot Wheels Heritage Series, the Chevy Silverado 4x4 was released. As a noticeably shorter and less wide version of this casting, it also featured an off-road 4x4 lift along with front brush guard.

The Chevy Silverado has come out in the following versions:

The difference in the 2 Chevy Silverado castings 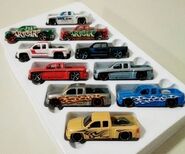 Retrieved from "https://hotwheels.fandom.com/wiki/Chevy_Silverado_(2007)?oldid=321668"
Community content is available under CC-BY-SA unless otherwise noted.