Circle Tracker is an unlicensed design of a futuristic stock car. The casting features a plastic wing; as of 2013 the wing is now cast into the body.

The Circle Tracker has come out in the following versions:

Born: 2009
Birthplace: El Segundo, CA, USA
Designer: Hot Wheels®
Specialty: With a cowl induction hood, V8 engine, and streamlined shape for aerodynamics, this stock car of tomorrow was made for tearing up the track.

Back Of S16 Promo 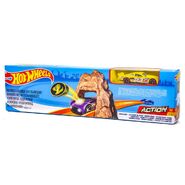