The Classic Packard is based on the real life Packard Eight, a high-end luxury automobile produced by Packard from 1930 to 1936. It appears to be specifically based on a De Luxe Eight sedan limousine model.

The Classic Packard has come out in the following 1/64 scale versions:

From the back of the 2010 Treasure Hunts card:

Born: 1930
Birthplace: Detroit, Michigan, USA
Designer: Packard Motor Company
Specialty: With a trunk mounted on the rear, fender-mounted spare tires, and a 12-cylinder "twin six" engine, this Packard was the luxury car of its time.

Both Treasure Hunts for 2010 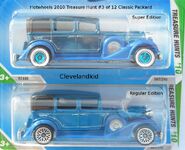 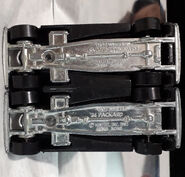 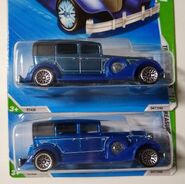