Between 2000 and 2002, 100% Hot Wheels released three 2-car sets with two versions of the same vehicle, one with showroom beauty and the other a tricked-out custom classic. The Cool 'N' Custom Set allows you the opportunity to have the best of both worlds, to have your cake and eat it too. To have it cool... and custom. 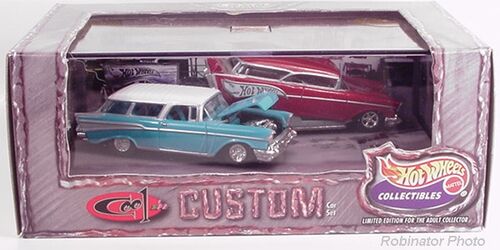 The '57 Chevy Nomad is considered one of the hottest station wagons of all time. It is celebrated for its performance as well as its styling. However, we feel that a stock car can be extremely cool and still leave room for a few custom touches.

The following vehicles were included in the Cool 'N' Custom 2-Car Set: 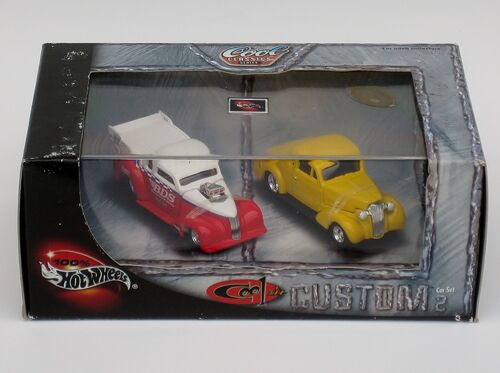 The '37 Chevy is considered one of the all-time American classic cars. It is celebrated for its original styling as well as being a jumping-off point for thousands of custom car builders. Any respectable weekend car show will feature selected versions, from super-clean classics to nasty street rods.

The following vehicles were included in the Cool 'N' Custom II 2-Car Set: 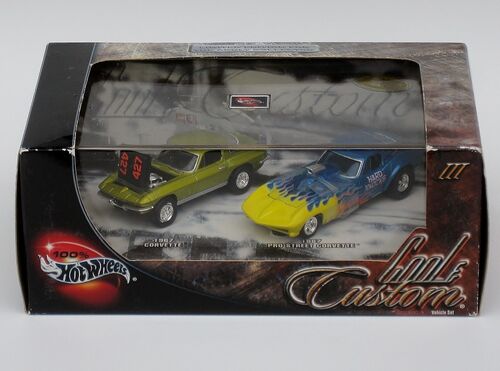 The Cool 'N' Custom III vehicle set offers two 1967 Corvette models. One is the cool sports car with the sleek, dramatic lines that made the 'Vette' an American cultural icon. For the Pro Street version, we took those classic lines and used them as a jumping-off point to create a fully tweaked, blown-out custom that is as hot as the pavement it would scorch.

The following vehicles were included in the Cool 'N' Custom III 2-Car Set:

Note: The 1967 Corvette Pro Street could be found with either white or yellow flames. See Gallery.