This Corvette C6R casting is based on the 2005 Corvette Le Mans-winning body style. The Chevrolet Corvette C6R is a grand touring racecar built by General Motors in partnership with Pratt & Miller for competition in endurance racing.

Since its debut in 2005, it has carried on the legacy of its predecessor, the C5R which holds multiple championship trophies and race wins in the Le Mans Series, FIA GT Championship, and 24 Hours of Le Mans.

The Corvette C6R has come out in the following versions:

Corvette C6 R
Add a photo to this gallery 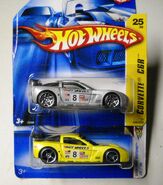 Add a photo to this gallery
Retrieved from "https://hotwheels.fandom.com/wiki/Corvette_C6R?oldid=259949"
Community content is available under CC-BY-SA unless otherwise noted.