The Corvette C6 Convertible was the last 2009 New Models casting to be released for 2009. It is not to be confused with the C6 Corvette which was released in 2004.

The Corvette C6 has come out in the following 1/64 scale versions: 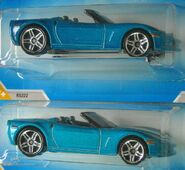 Light version
All the body lines are the same color as the car.

Darker version
All the body lines are very visable.

2009 New Models - Corvette C6 Convertible by Jairzinh0
Add a photo to this gallery
Retrieved from "https://hotwheels.fandom.com/wiki/Corvette_C6_Convertible?oldid=317708"
Community content is available under CC-BY-SA unless otherwise noted.