The Custom '62 Chevy was designed by Hot Wheels Designer Rob Matthes for the 2008 New Models Series. This great casting features a chrome pick-up bed with a small slot in it to hold a surfboard steady. Hot Wheels Collectors were blown away by Robs' design. The Custom '62 Chevy has become one of the most collected and sought after castings in 2008 and it's easy to see why. This truck ready for trip to The Beach!

At the end of 2016, this casting was modified: it lost its loose surfboard and gained a sunroof in its roof. A broken surfboard is now cast into the bed.

The Custom '62 Chevy has come out in the following 1/64th scale versions:

Differences between both versions of the Custom '62 Chevy. 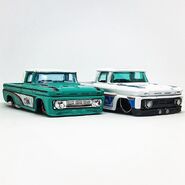 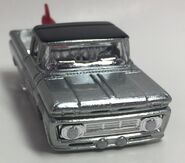 Retrieved from "https://hotwheels.fandom.com/wiki/Custom_%2762_Chevy?oldid=298100"
Community content is available under CC-BY-SA unless otherwise noted.