The Custom AMX was designed by Ira Gilford and debuted in the 1969 Hot Wheels line-up. It was only made in the USA and only came with a white interior. Most come with silver 'bearing' Redline wheels. Later releases came with Chrome 'Capped' Redline wheels, or sometimes a mixture. It came packaged with a metal 'Collector's Button'.

A very rare version was sold only in the UK: Ed Shaver's blue AMX which was sponsored by Hot Wheels. It replicated local real-life drag racer, The only difference between an 'Ed Shaver' AMX and an ordinary blue AMX are the stickers, so caution must be taken to determine whether the stickers are original when purchasing.

After a 41 year absence, the Custom AMC AMX was retooled in 2010 for the Red Line Club Membership car.

The Custom AMX has come out in the following 1/64 scale versions:

The Custom AMX was retooled in 2010 and debuted as the RLC membership Car: 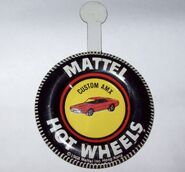 1969 Custom AMX Base
Community content is available under CC-BY-SA unless otherwise noted.
Advertisement