With most early Redline cars comes some secretive history, with most of them having at least one rare variant, be it the Cheetah Python, the aqua no-sunroof Custom Volkswagen, or the white interior Red Baron. But the history behind the Custom Camaro is a little more in perspective. The Custom Camaro was the very first Hot Wheel to escape the drawing board and be released to the public. The enamel white variant is a prototype, because what designers did with all new cars, is that they coated them with an enamel white or black coat to check for imperfections. Only a few were known to be mistakenly packaged and released to retailers. This car is extremely rare to find at all, let alone in the blister pack. According to Michael Zarnock's "Warman's Hot Wheels Field Guide: 3rd Edition (Values and Identification)", this is the third rarest Hot Wheels car to exist, and has a value of up to $2,500+ loose. The value for it still in the blister pack is immeasurable. No enamel black versions have been found to this day...

In 1967, when Mattel's biggest customer for their product line; J.C. Penney, was approached about the new line of toy cars they were going to release, Mattel salesmen put on a big show racing the cars down tracks. After their demonstration of this new product line, they asked how many would J.C. Penney possibly purchase. It turned out that the number J.C. Penney was willing to purchase exceeded the total production amount Mattel had anticipated. So another manufacturing plant had to be facilitated. Mattel opened a plant in Hong Kong.

By Mattel's account this were the very first Hot Wheels castings made. This does have some strong merit in today's collector's eye. Many years of independent research and study into the history of Hot Wheels have been done, with some very interesting prototypes being discovered.

Custom Camaro was one of the first cars released in the 1968 Hot Wheels line-up. The "Original 16" or "Sweet Sixteen" were released in spring of '68. This casting was One of the First in the line-up. Chevrolet had just released a new model during the design stages of the Hot Wheels car, it was the 1967 Camaro. So Harry made one too. It seems both would be a big hit.
Interiors come in assorted colors, with the most interesting, the early Hong Kong casting having matching colors Blue on Blue and Antifreeze on Dark Green.
Early USA bases had the four open hole design, like their counterparts in Hong Kong, but they were a bean shape hole. Known as the Kidney Bean Base. Another version is the tabbed base.
USA cars do not have door-lines, but the Hong Kong casting does. Early Hong Kong has a painted tail, same color as the car. Early Hong Kong cars have deep-dish wheels, some all four, some just the front two. Some have been found with Heavy Chevy windows. It is suggested that no other car has more variations than this car. There was no "series" in 1968. Just the regular line-up. So collector's call it the "Sweet 16" or "Original 16". They were packaged with a 'Collector's Button'.

The Custom Camaro has come out in the following 1/64 scaled versions:
Notes: Clear windows, No door lines, flat base with less mechanical detail. Steering wheel is part of the interior mold, silver paint on wheels.
Colors are descending in rarity from common to rare.

The Custom Camaro has come out in the following 1/64 scaled versions:
Notes: Blue tinted glass, door lines, four square holes & more detailed base. Steering wheel stuck into the interior, chrome foil on wheels.
Colors are desending in rarity from common to rare.

The Custom Camaro has come out in the following 1/64 scaled versions: 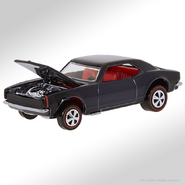 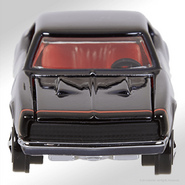 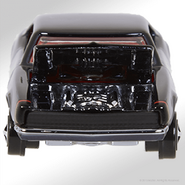 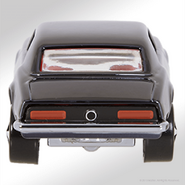