The Custom Chevy Greenbrier Sports Wagon was manufactured from 1961 to 1965 for the North American van market. Its main competitor, the Volkswagen Transporter, which was what triggered the launch of several large-capacity passenger vans from 1950s into the early 1960s. The Chevrolet Greenbrier was one of these vehicles. Although the Chevrolet Greenbrier had only a short production run, but it did leave its mark on van production history, as a basis for the future Ford Econoline and Club wagon.

Hot Wheels has taken the basic van, lowered and 'raked' it by making the rear wheels larger than the front wheels, giving the body a forward slant. Hot Wheels also fitted a huge boxer engine in the back that is moulded into the base piece. Cast into the roof are two surfboards fitted on a roof rack and the interior features a roll cage.

The Custom Chevy Greenbrier Sports Wagon has been released in the following 1/64 scale versions: 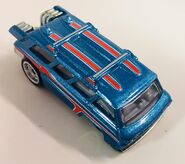