The Custom Corvette was one of the first cars released in the original 1968 Hot Wheels line-up.

According to lore, because of the fact that Harry Bradley worked for GM shortly before moving to Mattel, he snuck out copies of the blueprints into his cane (he had polio) for the real '68 Stingray and used them as a base for the Hot Wheels model. Since he was a designer there, he knew exactly where to get the materials for designing these new "Hot Wheels" in 1967; when the casting was released, GM "was not happy".

When the first 16 Hot Wheels debuted in the summer of 1968 (the Custom Corvette was one of them), the cat was out of the bag, as Chevrolet's 1968 Corvette was not due out for another few months still. This worked out in a good way, as it created more hype for Chevrolet and the Stingray from both kids and adults alike.

The Muky Toys Co. of Argentina purchased (or illegally acquired) the old tools and dies for this casting when they were retired by Mattel and used them to make their plastic-bodied line of Hot Wheels clones in the 1970's, only sold in the Argentinan market

All USA versions had Clear glass, a steering wheel that was inserted in the dashboard and the end of the car was part of the base.

The Cars were packaged with a 'Collector's Button'.

The Custom Corvette has come out in the following versions (colors are desending in rarity from common to rare):

The Custom Corvette has come out in the following versions (colors are desending in rarity from common to rare):

The retooled Custom Corvette has come out in the following versions: 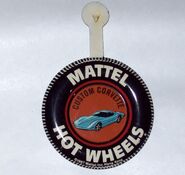