The casting was a co-design between Hot Wheels Designers Mark Jones and John Violette. The original illustration for the casting was created by Mark Jones. Violette then took the design and turned it into the 3D form. This model has no window piece. The casting has been modified three times. The 2008 original had metal wheel wells and fenders. In 2014 these became part of the plastic interior and base. In 2016, both the metal casting and the plastic rollbar piece were modified; the wheel on the back was made part of the interior piece. Then for late 2018, the original metal wheel wells casting returned for the Ford Pickups Set, albeit with a plastic base.

The Custom Ford Bronco has come out in the following 1/64 scale versions: 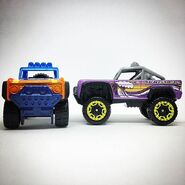 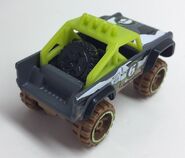 Add a photo to this gallery
Retrieved from "https://hotwheels.fandom.com/wiki/Custom_Ford_Bronco?oldid=334040"
Community content is available under CC-BY-SA unless otherwise noted.