The Custom T-Bird is a Hot Wheels casting, which was designed by Harry Bradley and debuted among the 'Original 16' in 1968. It is based on the real-life 1967 Ford Thunderbird. It features a die-cast body and chassis (base) and an opening hood which reveals a detailed engine. The Cars were packaged with a 'Collector's Button'.

The Custom T-Bird was manufactured in both the USA and Hong Kong production facilities and there are several differences between the two. USA versions were produced with clear glass and silver wheels, while Hong Kong (HK) had blue tinted glass and chrome wheels (all T-Birds came with 'Bearing' style Redline wheels). HK cars had an unpainted bare metal grille, and USA cars had a black painted grille which could be found completely painted black, or with the Thunderbird emblem unpainted. The front fender wells of USA T-Birds are larger and higher cut than their HK counterparts and the cowls are also larger. The Custom T-Bird featured painted rear taillights with USA versions painted in a metallic darker red and HK with a bright flat red. There are several differences between USA and HK bases, most notably the lack of suspension detail and four square holes (to view the bent-axel suspension) on the USA version, there are also multiple variations of the layout and size of the copyright information.

The Custom T-Bird was painted in a wide variety of Spectraflame colors of which there are a handful of hard-to-find and rare versions. All Hong Kong cars and most USA cars came with a black painted roof which simulated the vinyl roof of the real car. USA 'No-Black-Roof' (NBR) cars are fairly uncommon and most notably the Spectraflame Gold NBR with a white interior, which could only be found in 1968 Store Displays.

During the end of the Custom T-Bird's production, the USA casting was modified in preparation for the TNT-Bird. The modified casting featured 'Door Lines' and are very rare.

In 2018, the Custom T-Bird was re-tooled for the HotWheelsCollectors.com Original 16 Series based on the original Hong Kong version.

The Custom T-Bird has come out in the following versions:

The Custom T-Bird has come out in the following versions: 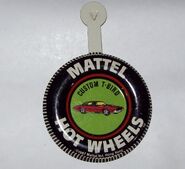