The Custom Volkswagen was one of the cars released in the original 1968 Hot Wheels line-up. Designed by Ira Gilford and Harry Bradley. Based On the very popular Volkswagen beetle. Although not a rear engined car for the Hot Wheels version, It has a blown V-8 in the trunk. Ya  you remember they had the trunk in the front. Herbie on steroids!

The Custom Volkswagen has come out in the following 1/64 scale Hong Kong versions:

The Hong Kong Version is quite different from it's U.S. Counterpart. The Glass was tinted blue, Plastic motor, Black steering wheel (stuck into interior), Four holes in the base and detail suspension. Interiors: White, Lt. Brown, Dk. Brown.

The Custom Volkswagen has come out in the following 1/64 scale 'NSR' Hong Kong versions:

Although it has things in common with the Sun Roof model there is a difference between the NSR and the Sunroof models. besides No Sun Roof, No side windows. Different interior.

The Custom Volkswagen has come out in the following 1/64 scale United States versions:

Notes: Clear windows, Metal engine, Steering wheel part of molded interior, front head lights are part of the body, Front window is larger, less detail on the base. White Interior is normal, but can be found in dark interior.

The retooled Custom Volkswagen has come out in the following 1/64 scale versions:

A rainbow of Volkswagen's 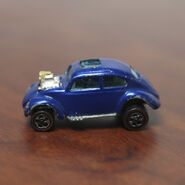 Retrieved from "https://hotwheels.fandom.com/wiki/Custom_Volkswagen?oldid=399549"
Community content is available under CC-BY-SA unless otherwise noted.