The Datsun 240Z is a Hot Wheels casting based on the real car of the same name and was recreated in 1:64 scale by Hot Wheels designer Phil Riehlman.

The Datsun 240Z has been released in the following versions: 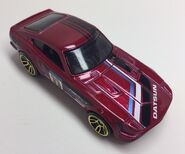 Retrieved from "https://hotwheels.fandom.com/wiki/Datsun_240Z?oldid=322338"
Community content is available under CC-BY-SA unless otherwise noted.