The Deora was part of the Original 16 in the 1968 Hot Wheels series. The car was based on the 1964 Dodge Deora, a real-life concept truck designed by Harry Bradley, (who, by 1968 was working as Hot Wheels' own designer) and built by Larry and Mike Alexander. The Cars were packaged with a 'Collector's Button'.

In 2000, Nathan Proch designed a sequel to this casting, named the Deora II. It was loosely based on the original, but more streamlined and aerodynamic. One year later, in 2003, a full-size working version of the Deora II was built, bringing the legend of the Deora full-circle.

The Deora is most recognized for its' two detachable plastic surfboards. This casting is the only model from the Redline era to have four small Redline tires.

The Deora has come out in the following versions:

Notes: On USA versions, the base incorporates the front bumper, headlight, and grille area. Other identifying features are a flat base, louvered headlights, clear windows, and silver foil wheels.

Colors are descending in rarity from most common to most rare.

The Deora has come out in the following versions:

Notes: On Hong Kong versions, the base includes the headlights and front bumper (but not the grille area) Other identifying features are blue-tinted glass, chrome foil wheels and smooth headlights.

Colors are descending in rarity from most common to most rare.

The rear view of the creamy pink deora

Unpainted base plate of the toy 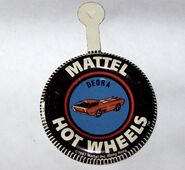 The Deora has been released in in the following versions:

Front view of the original packaging of the DeWalt Deora

Back view of the original packaging for the DeWalt Deora

Side view of the 2008 Deora Metallic Lavender Version