The Dodge Charger Drift Car is a vehicle from the Formula Drift racing series. This vehicle was campaigned by Nuformz Racing's Shaun Carlson and driven by two-time champion Samuel Hübinette.

This casting has undergone several retoolings beginning in 2011 where it was given a police light bar and push bar, then again in 2015 where the casting lost its roll cage, the lightbar was also altered along with the spoiler which was integrated into the metal body. In 2016 the casting was once again retooled, this time the push bar and light bar were removed whilst still retaining the integrated spoiler. Both the 2015 and 2016 versions co-exist, appearing with and without the police equipment depending on what series the car appears in and where the castings was manufactured.

In posters, this casting was titled "'08 Dodge Charger Drift".

The Dodge Charger Drift Car has been released in the following 1/64 scale versions:

The police version of the Dodge Charger Drift Car has been released in the following 1/64 scale versions: 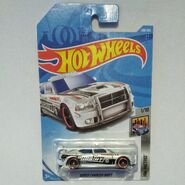