The Dragster is an original Hot Wheels casting designed by Larry Wood that debuted in the 1994 Hot Wheels mainline. It originally wore the name of Driven To The Max, but has also gone under the name "Mongoose Dragster", "Snake Dragster" in the past before being called just simply "Dragster".

The Dragster has been released in the following 1/64 scale versions: 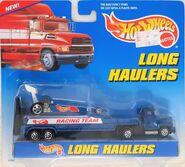