The Dump Truck was a vehicle which debuted in the 1970 Heavyweights Series of futuristic trucks, all designed by Ira Gilford. The Dump Truck uses the long body which was also used by the Cement Mixer and 1971 Waste Wagon. It came with a yellow functioning dumper which had either a brown or orange bottom. It could be found with either a white or dark brown interior. It came packaged with a metal or very rare plastic 'collectors button'.

In 2012, the Dump Truck was retooled as part of the HotWheelsCollectors.com Series 11 Neo-Classics.

The Dump Truck has come out in the following 1/64 scale versions:

The Dump Truck has come out in the following 1/64 scale re-tooled versions: 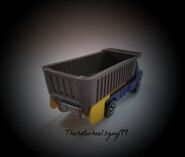 Back
Community content is available under CC-BY-SA unless otherwise noted.
Advertisement