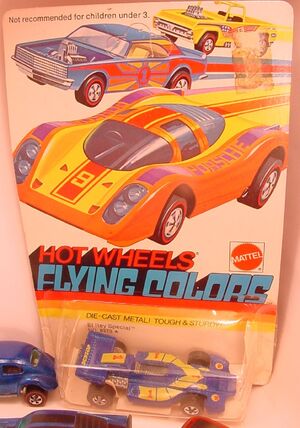 Will the Real Flying Color paint please stand up?!? The El Rey Special runs a close race for castings with the most alternative colors.

The El Rey Special was originally released in 1974, with enamel paint and the new Flying Colors tampo. Early versions can be found with capped rear wheels and were released in the '74 style blister-pack. It is unsure which was issued first in 1974, the Light enamel Green or Dark enamel Blue; this was such a short run before the casting change to the Formula P.A.C.K. It is hard to trace the history of the name. The fact that the Formula Pack showed up mid- to late-1975 in the 6-pack, means the El Rey Special was only made for about a year and half.

The El Rey Special has come out in the following versions:

Notice the Open Axle on the rear. Most have capped rear wheels in the Dark Blue.

The El Rey Special has come out in the following versions: