The Enderman is a black, neutral mob (mobile) from the End (a Minecraft dimension) that has the ability to teleport. They appear in the videogame Minecraft. Endermen do not attack unless provoked by a player attacking them. When provoked, endermen will open their mouths and shake with rage; when provoked by being stared at, they will also make a lengthy, loud, threatening sound and will run towards the player to attack.

The Hot Wheels version of this "mob" is styled after a 1977 Lincoln Continental. Its trunk is opened and it features the characteristic Minecraft blocks on the front bumper.

The Enderman has come out in the following 1/64 scale versions:

Minecraft Enderman as it appears in-game. 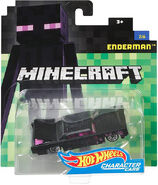 Enderman package front.
Add a photo to this gallery

Retrieved from "https://hotwheels.fandom.com/wiki/Enderman?oldid=354318"
Community content is available under CC-BY-SA unless otherwise noted.