Noted for two machine guns on each side of the car, missiles on the roof, and its rear-mounted laser gun, it deserves the name of The Enforcer. First came out as the Megadestroyer 1 and 2 in 1982 as part of a series based on the movie Megaforce. It was later released as the Super Cannon. Enforcer is the 3rd and current release name.

The Enforcer has been released in the following versions: 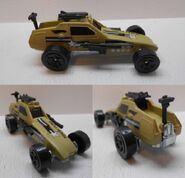 Enforcer in STD2 (Same as 1996 release except for the wheels) 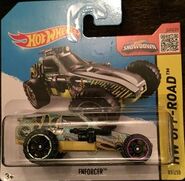 ENFORCER SWAT
Add a photo to this gallery
Retrieved from "https://hotwheels.fandom.com/wiki/Enforcer?oldid=341925"
Community content is available under CC-BY-SA unless otherwise noted.