Originally slated to be released in the canceled Turbo Driver game series (based on a picture of all of the prototypes), the Ettorium snuck into the line, right past the 2010 New Models and went straight into the Egg-Clusives section of Wal-Mart - due to 'tooling' timing and politics of mix selections. Josh Henson had intended for the Ettorium to be in the 2010 New Models, but since it was more 'kid' than collector, it became an Egg-Clusives car.

Josh Henson did the Ettorium being inspired by old Bugatti open wheeled racers, particularly the Bugatti Type 35 - with the signature boat-tail design. This is a retro future version of those old racers, with a couple NOS tanks thrown in for good measure. The 'Wild Hare' graphics (in the Egg-Clusives version) were added by Josh Henson once the car was chosen to be an Egg-Clusives car.

To quote Josh Henson, "It's a pretty wacky original, and I wasn't sure if collectors would like it."

The Ettorium has come out in the following 1/64 scale versions: 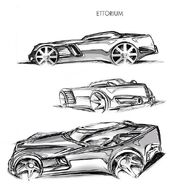 3D model
Add a photo to this gallery
Retrieved from "https://hotwheels.fandom.com/wiki/Ettorium?oldid=349521"
Community content is available under CC-BY-SA unless otherwise noted.