In the 2015 video release Team Hot Wheels: Build the Epic Race!, Brandon's Quick n' Sik is destroyed by the Land Pirates and is replaced by a blue version of Fast 4WD, similar to the CFK31 version. The car's name is a play on "fast forward" and "4WD" (four wheel drive).

The Fast 4WD has been released in the following 1/64 scale versions: 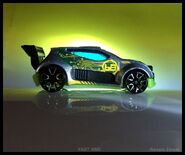 FAST 4WD CFL87
Add a photo to this gallery
Retrieved from "https://hotwheels.fandom.com/wiki/Fast_4WD?oldid=322926"
Community content is available under CC-BY-SA unless otherwise noted.