Fast Fish is a Hot Wheels contemporary muscle car casting designed by Fraser Campbell that debuted in the 2008 New Models.

The name & general appearance suggest that the casting was inspired by the 1970 Plymouth Barracuda, although the styling of the car is definitely 21st-century. This Hot Wheels version of a contemporary muscle car comes equipped with quad exhaust and a transparent hood bulge to show off the brute force of its 8-cylinder engine and let you know it's fast and fierce. The spoilers around the car, top and bottom, as well as the styling of headlights and other features give an impression of an American muscle-car take on laser precision.

In 2014 the tooling for the Fast Fish was updated: the spoiler is now a part of the metal body and is no longer a separate piece.

Fast Fish has been released in the following versions:

Fast Fish on Show by HotTalon

Fast Fish on Back Slider by HotTalon

Design From The Car Maker 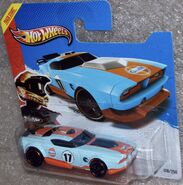 Retrieved from "https://hotwheels.fandom.com/wiki/Fast_Fish?oldid=298672"
Community content is available under CC-BY-SA unless otherwise noted.