The Fast Fortress is a unique vehicle modeled after the infamous U.S. B-17 bombers of World War II. The engines have been repositioned closer to the body and the wings are shortened, as was the body. The engines, which on the original airplane had propellers, have had the blades removed for this model. Another interesting detail is the obligatory painting of a lady just below the canopy, something that was found on real B-17's. This one is nicknamed "Naughty Lady". With six wheels, it deserves the name of Fast Fortress. In 2015 this casting was retooled to have only one rear axle.

The Fast Fortress has come out in the following 1/64 scale versions: 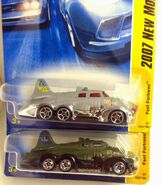 Add a photo to this gallery
Retrieved from "https://hotwheels.fandom.com/wiki/Fast_Fortress?oldid=384422"
Community content is available under CC-BY-SA unless otherwise noted.