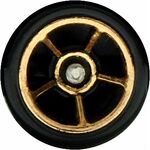 This is a list of Hot Wheels Faster Than Ever vehicles released between 2005-2006 & 2009-2010. To the right is what the Faster Than Ever wheel looks like, or also known as the FTE. The Faster Than Ever wheel is more than just a wheel. Its copper color signifies that the axle on that particular vehicle is nickel-plated. This nickel-plating of the axle creates an extra smooth surface (causing less friction) therefore, making the car faster than its non-nickel-plated counterparts. FTE wheels were brought back in 2009 due to a strong collector demand. These vehicles are sought after by any Hot Wheels Collector that loves to race their vehicles. The series was last seen in 2012 and currently remains inactive.

See also Category:Faster Than Ever

Retrieved from "https://hotwheels.fandom.com/wiki/Faster_Than_Ever?oldid=401513"
Community content is available under CC-BY-SA unless otherwise noted.