The Ferrari 599XX is a track-only version of the 599 GTB Fiorano, part of Ferrari's XX program for research and development purposes. While appearing similar to the road-going 599 at a glance, the 599XX, developed by Ferrari Formula One engineers, features many changes and improvements from the 599, particularly an uptuned 6.0L V12 engine and dual winglets on the C-pillars, to make it highly responsive on track. An improved version, named the 599XX Evoluzione, was unveiled in 2011; this version features a large wing with active aerodynamics to improve cornering characteristics. A total of 44 599XXs were produced.

This was one of the last Ferrari castings made before Mattel lost their license with Ferrari on December 31, 2014. 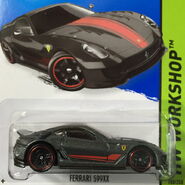 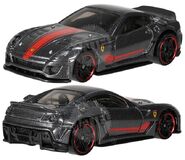