The Ferrari F40 is a Hot Wheels casting which debuted in 1989 and was discontinued in 2014. It is based on the real life Ferrari F40 of which only 1,311 samples were built to celebrate Ferrari's 40th anniversary. At its time of release, the Ferrari F40 was the fastest production car in the world (over 500 units produced) with a top speed of 199mp/h and a 0-60mp/h time of 4.2 seconds.

The Hot Wheels Ferrari F40 is known for its opening rear section to view the engine compartment, akin to the real life F40. In 2014, mid-way through its production for the Ferrari 5-Pack release, the Ferrari F40 was re-tooled to remove this opening feature. Other changes to the casting include closed headlights, a slightly wider body, shallower side air ducts and completely new windows, interior and base which was now plastic in replacement of the original metal one. It is possible to find two versions of the 2014 Ferrari 5-Pack, with either the original F40 casting or the new replacement. This would be the final release of the Ferrari F40.

The Ferrari F40 has come out in the following 1/64 scale versions: 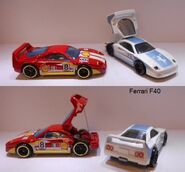 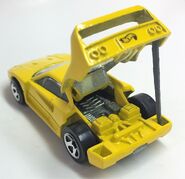