This is a highly customized version of the original Fiat 500 (not in fact the later 500C) produced in Italy from 1936 to 1955. It featured a 569 cc four-cylinder engine with the radiator mounted behind, thus enabling the distinctive sloping nose. The car was popularly know as "Topolino", literally "little mouse" but more specifically the Italian name for Disney's Mickey Mouse. The Hot Wheels version has been converted to a dragster complete with high-mounted wing and exposed engine. Like many racing cars, this Fiat has been converted to not right-hand drive, but central drive with the steering wheel in the centre of the car.

The Fiat 500C has come out in the following 1/64 scale versions:

Specialty: When this car was first made, it was one of the world's smallest automobiles. This Version features a giant V8 engine, larger rear tires and a wing. 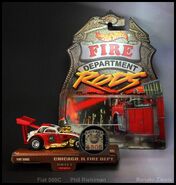 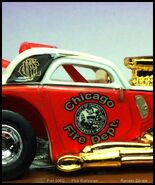 Back of Japan Card
Community content is available under CC-BY-SA unless otherwise noted.
Advertisement