The Finn has come out in the following 1/64 scale versions:

A good guy with a bad start, the First Order couldn't overpower the good that lay within this sports car. Emulating Finn's gentle empathetic nature, this Resistance fighter has the speed and precision needed to kick it into sixth gear and defeat his foes when it's go tome. In the even he needs extra firepower, his blaster can be found on the car's lower rocker.

The brown body cladding wraps around the car like his signature jacket, providing extra protection during the most intense battles. Unfortunately, even the best fighters can't go unscathed, which can be seen by the battle scars found on his upper body. 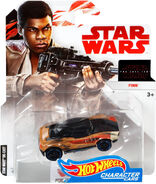 Finn package front
Add a photo to this gallery
Retrieved from "https://hotwheels.fandom.com/wiki/Finn?oldid=279837"
Community content is available under CC-BY-SA unless otherwise noted.